Delighted to share the publication resulting from our residency in Madrid last summer with Matadero Madrid Study Group on Ecologies. It documents the processes and shares the conversations (in Spanish and English) about the soils of the river Manzanares – its past, present and future. Thanks to everyone who contributed. 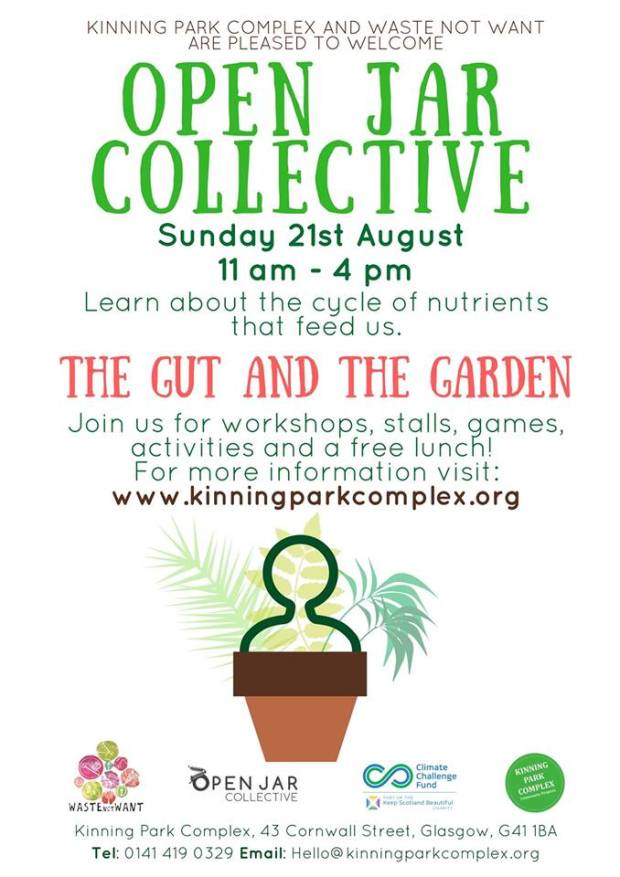 What would you do with 40,000 samples of Scottish Soil? And why on Earth might you have such a thing? We were lucky enough to find out, spending an incredible day at the James Hutton Institute http://www.hutton.ac.uk/ in Aberdeen. The James Hutton Institute is an international research centre that works with some of the world’s most significant agendas around climate change, food and water security. Previously called the Macaulay Land Use Research Institute, since 1930 they have been collating the data and physical samples from it’s soil research into an archive. Shelves of labeled paper bags, plastic pots, jars, files, boxes. The day was spent exploring, examining, documenting and in conversation. 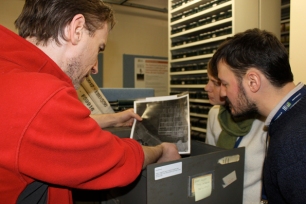 As strangers to the processes of soil science, the scale of the collection, was overwhelming, almost like discovering a particular hoarding habit. Hanging on to tiny amounts of something seemingly so simple, so common. As common as muck. Where does the collection stop we wondered? What is the collection worth? As we were generously given the trust to open draws, handle pots, flick through old field notes, the significance of the collection, the attention to detail became more and more apparent. Its worth is in the information and data that this collection can provide, to help us better understand how to use and the protect this valuable resource in our land. To inform policy around agriculture and to better understand the relationship between carbon and soil. 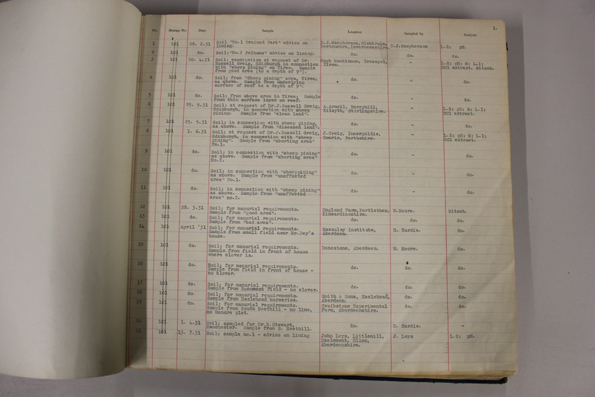 A discussion about the relationship between soil and war resurfaced at several points. The collection was started during the second world war. The same time that aerial photographs appeared as a form of wartime surveillance and so it became possible to begin to make assessments on soil from the sky. Food security for the country was utmost and ultimately this rested on the productivity of our fields and our soils, the extent to which was an unknown at this point. 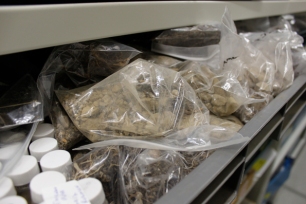 The ‘Soil Sampler,’ was the character who walked and climbed every 15metre square of Scotland, with a spade. Dug an at least one metre deep pit, noted it and took back bags of 15g samples that resulted in this collection. A manual and labour intensive process. We wondered to what extend does the personal, or subjective play some small role in such scientific processes? Intrigued by the fact that one sampler might see the colour of the soil with slightly different eyes. 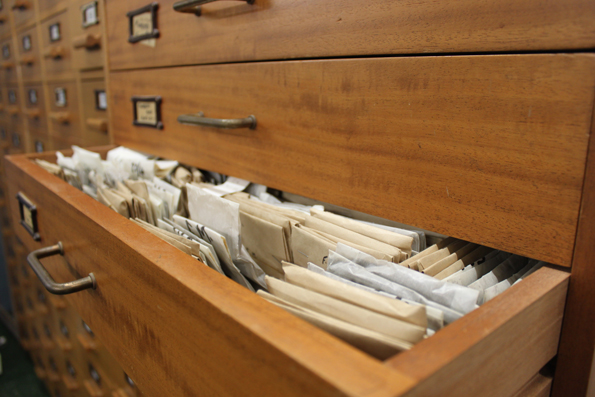 The soil samples have been processed, tested and analysed to record their composition. This is complemented by the soil survey, which notes the character of the area, what was growing, the weather, human activity etc.. These feed into the beautiful soil maps of Scotland, which can be accessed online here http://www.soils-scotland.gov.uk/data/soil-survey

* Note this event has been rescheduled to the 29th of April * 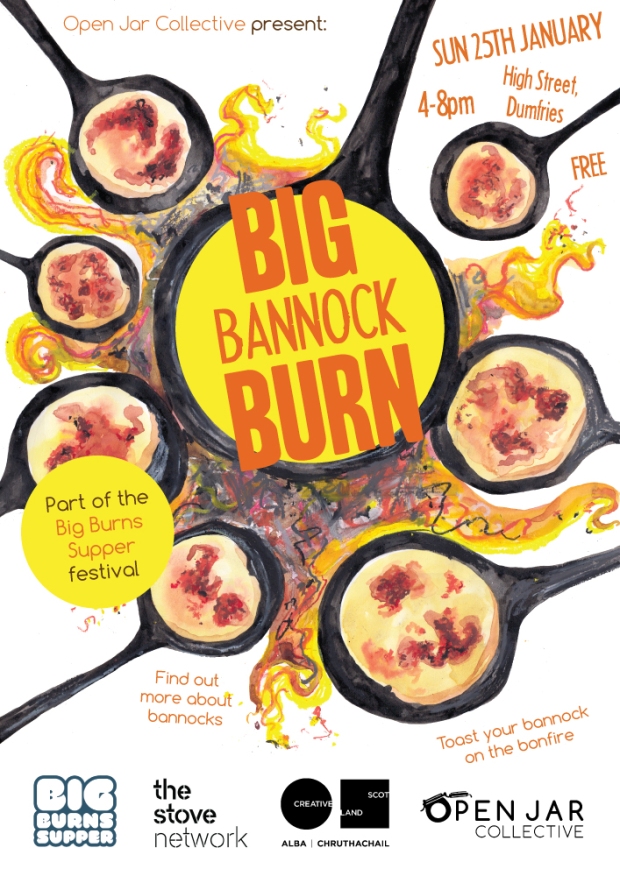 The Empire Café is popping up in Glasgow this week and next for the Commonwealth Games celebrations.To celebrate the diverse menu that will be on offer, we’ve worked to put together a recipe zine to document the stories and personalities working behind the scenes.

If you can’t make it along to the café, you can purchase them here.

The latest recipe to make its way into The Empire Cafe Zine will be McCune Smith‘s take on the empire biscuit.  They’ve added their own seasonal Scottish twist to a recipe for ‘imperial biscuits’ from the Glasgow Cookery School Book.  Harrie’s edition of the book was published in the 1930’s (exact date unknown) but a centenary edition has been printed and is widely sold again.

“Once the bible of Scottish cuisine, the recipe book was the set text for the Glasgow and West of Scotland College of Domestic Science, affectionately known as the Dough School by locals.”

These delightful biscuits and Open Jar’s recipe Zine will be on sale at The Empire Cafe all week from Sat 26 Jul – Fri 1 Aug.  And The Empire Cafe’s full programme of events, talks and workshops is now live!

Last weekend Clem Sandison from Open Jar Collective was invited to give a talk by the Andrew Raven Trust at their Annual Weekend. This year’s event focused on a question – What is the impact of how we consume food in Scotland?

It was a stimulating weekend of debate. Here are some thoughts and messages that particularly stood out for me – gleaned from my scrawled notes!

Enjoyed a lovely day cooking with the Grow Green team in preparation for The Empire Cafe. We heard the story behind Ian’s curried carrot and lentil soup, tested out the oatcakes, created a deliciously simple beetroot and orange salad, and shared warm banana cake in the sweltering Playbusters kitchen.

We also got a tour of the Parkhead Community Garden – an edible oasis in the heart of the East End.  They’re hoping to supply some of the produce for their menu at The Empire Cafe on Wednesday 30th July.

We’re saving Ian’s secret recipe for our Zine, but you can try out the yummy beetroot salad at home.  It couldn’t be simpler.

You could try adding raisins or fresh parsley. Enjoy!

Today we had a serious production line going for the Thai Curry Puffs, which incidentally do not have curry inside them (although they can be served as a savoury pastry). June taught everyone how to make the sweet version that are traditionally served with tea of coffee and have a bean paste filling.

Soul Food Sisters are about to launch an 8 week pop-up cafe in the Queens Park Arena, with the grand opening on Saturday 21st June as part of the Southside Shindig.  These women really know how to cook!  Don’t miss it.

Cooking with Taste of Africa

Emily Chappell and Clementine Sandison from Open Jar Collective are working on a zine to document some of the incredible recipes and stories behind the food that will be served at The Empire Cafe.

The Empire Café is an exploration of Scotland’s relationship with the North Atlantic slave trade through coffee, sugar, tea, cotton, music, visual art, academic lectures, poetry, debate, workshops, historical walks, film and literature. The café will be based in the Briggait (home of the Merchant’s Steeple) in Glasgow’s Merchant City from 24th July – 1st August 2014.

Clem has developed the food outreach programme and is working with Cafe Operator McCune Smith and five social enterprises from across the city to develop a unique menu for the cafe which will change on a daily basis.  The menu will reflect the diverse cultural heritages of people living in Glasgow, explore Scotland’s trade history, and showcase the best local produce as well as fairly traded goods from around the World.

On Monday Taste of Africa did a test run of dishes from Algeria, Gambia and Nigeria for their menu which will be served at The Empire Cafe on Friday 1st August.  This included a Gambian ‘Scotch egg’ made with minced lamb.

Gambia was a British colony from 1888 – 1965.  Interestingly, The Colonial Development Corporation (established in 1948) set up the Gambia Poultry Scheme which was intended to produce 20 million eggs for the British market.  This export scheme was a spectacular failure.

It has left us wondering if there is any connection between this traditional Gambian egg dish and the British equivalent.  Does the ‘Scotch egg’ originate in Scotland or is it more closely related to the Indian kofta?  If anyone knows the story behind it, then please let us know!